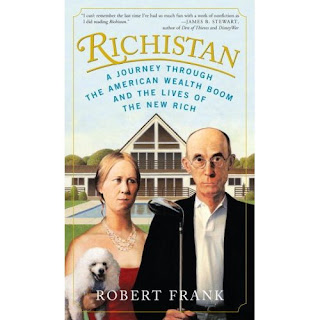 Richistan was written by Robert Frank, a writer for the Wall St. Journal and is a tour through the upper class, broken into 3 categories of rich, super rich, and ultra rich. Interesting enough to scan through in a 3-4 hour read, but borrow my copy . One constant is the lack of feeling content or happiness everyone seems to feel. At no matter what level and what they have, they also want twice as much. Flashback to scenes in the street of Shanghai where people seemed to have relatively nothing in a very small dwelling on the street but smiles all around. No, I didn’t ask them, it was something you could feel in the air. I’m not saying its better to be poor in Shanghai, but it all comes together in the ‘money does not buy happiness but it sure helps’ adage. These people are saddled with enormous amounts of obligations and many STILL spend beyond their income production which seems amazing if you are worth $20 million. Discussing the book with Chris Wilkerson he suggested I read Social History of the Rich, which sounded a bit more thoughtful than this book.

The journalistic writing style of this book makes it readable, but the lack of analysis makes me yearning for a bit more when spending the amount these books cost. There are quite a few nuggets of data and I enjoyed the tour, but for a guy who has spent several year wandering around with these folks you’d think he’d be able to make a few more astute observations than pointing out the obvious lessons. Maybe though, the world just isn’t that complex. Ultimately, happiness comes from a search within, and the physical motions and actions we take act only as distraction to a true course.
Posted by adam lake at 12:35 PM