Intel officially owns up to GPU plans with Larrabee

From arstechnia article here: Project Larrabee — Intel has begun planning products based on a highly parallel,

"IA-based programmable architecture codenamed "Larrabee." It will be easily programmable using many existing software tools, and designed to scale to trillions of floating point operations per second (Teraflops) of performance. The Larrabee architecture will include enhancements to accelerate applications such as scientific computing, recognition, mining, synthesis, visualization, financial analytics and health applications. "
Posted by adam lake at 9:41 AM No comments: Links to this post

Condos in the Pearl District

I was doing price comparisons for housing last year and kept a spreadsheet of a bunch of listings in the 97210 and 97209 zip codes. This past week I was running through the pearl district and noticed that there were a bunch of lock boxes on the outside of the marshall wells loft building and another building, each had over 10 (probably closer to 20) units clearly for sale. Buildings are going up all around the area as well. And, back to the price comparisons issue: same square footage units in these buildings were EXACTLY the same price this year. The local media is doing very little reporting about this. There are at least 130 units available (www.portlandcondos.com, search pearl district), and a bunch of listing s with similar square footage of the units I was looking at a year ago. Just a datapoint for any home shoppers. It’s a great area in Portland, but it appears to have hit at least a short term stability.

Another thing that happened last year was that there were several condos put up for sale, then taken off the market as winter approached. Those units are back up for sale, and I suspect holding at last year's prices.

I'd leverage this information in any purchase to your advantage.
Posted by adam lake at 4:41 PM No comments: Links to this post 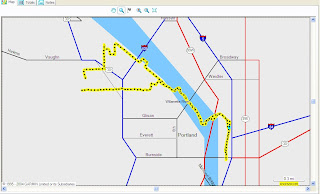 I got a new toy a few days ago for a bargain price off of Amazon. Here's one of my treks wearing my new Garmin Forerunner GPS wrist watch.

There can be only ONE! Notice how I walk on water with jedi like prowess.
Posted by adam lake at 11:01 AM No comments: Links to this post

I picked up Guitar Hero II a few weeks ago and its just been a blast. Made it through Easy and Medium without a hitch, but have been halted on my first song on Hard. Some great songs to play along with and its quite addictive. One of the best parts about it is that you can gte on, start playing a song in about 10 seconds, and quit after one song and still have made progress in your game.

I need to get a handle on being able to pick both up and down. Additionally, being able to move my hand quickly on the fretboard to hit the lower fret then move back up. When trying to get Star Power I always seem to lose the most significant portion of the bonus multiplier because getting the star power causes me to miss a note.

I also think that its going to be better in the long run to actually hold the picker between your fingers to make motion more efficient.

Hey Kim, Lookout! I'm after you on the leaderboards ;)
Posted by adam lake at 10:40 AM No comments: Links to this post

Come see your favorite fashion designers in Portland.
Posted by adam lake at 10:34 AM No comments: Links to this post