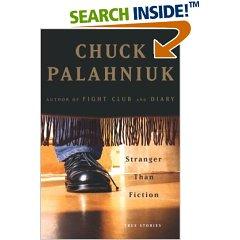 I read an uninspiring book recently, Stranger than Fiction: True Stories. Chuck Chuck Chuck…you did so good with Fight Club that I thought I’d give you another shot. I read your ‘biography’ of Portland called Fugitives and Refugees, which was of interest to me and anybody else interested in the bowels of the beautiful city of Portland but was hardly a masterpiece. This book follows a similar trend of paying a writer disproportionate amounts of money for their stream of consciousness (excuse me, isn’t that what BLOGGING is for?). I am actually quite surprised its actually legal..i mean did an editor actually say this was good enough to kill a tree for? if you want my time I require more insight, more depth, and more critical thinking that this. I truly enjoyed fight club as a movie, and I got a kick out of Fugitives and Refugees. but this book is not good, and the funny thing is…the people in the book are not even that weird which would be the point of a book about things stranger than fiction. Here I share the intellectual climax:

"What's coming is a million new reasons not to live your life. you can deny your possibility to succeeed and bame it on something else. you can fight against everything--Margaret Thatcher, property owners, the urge to open tha door mid-flight...everything you pretend keeps you down. You can live Kierkegaard's inauthentic life. Or you can make what Kierkegaard called your Leap of Faith, where you stop living as a reaction to the circumstances and start living as a force for what you say should be."

0 out of 5 stars, not recommended. I’ve heard good things about Lullaby, and Chuck’s a Portland native, so I’ll give him another try. if fight club came out of this guy he’s got something up there and just didn’t show it this time.
Posted by adam lake at 10:19 AM

you should cut and paste this review to Amazon's reviews!