First blog from my iPhone

just wanted to see if it would work
Posted by adam lake at 7:46 PM No comments:

I just finished a book recommended by Matt Pharr, a recent hire in my Advanced Visual Computing Group at work. We were discussing some of the challenges of our work environments and he sent me a link to this book. If you are a manager, architect, team lead, or even a jr. engineer I'd recommend a review of this book. It has a conversational blog like tone but is very well written bite size chapters. If there is one thing I got out of this book was a reassurance that I was not alone in the spectrum of what I do on a daily basis for my job. Covering NADD: nerd attention deficit disorder, distinguishing The Zone from The Place, discussion of the nerd cave, organics vs. mechanics, free electrons, etc. all provided a colorful, useful way of thinking of the various people including yourself that you come across with every day in an engineering organization. Unlike many business books I actually recommending reading all the chapters becuase they actually cover very different material, not 1/3 the book full of some new ideas than 1/3 rehashing those ideas then the other 1/3 trying to sell you the other books the author has written. 4.5 out of 5 stars for an engineering manager, of little value to others in non-technical fields
Posted by adam lake at 12:24 PM No comments:

Cooking Oatmeal in a rice cooker

Stacey and I had been frequenting a local coffee shop over on Hawthorne, Common Grounds, handily one of the best of many in portland. They have had some impressive oatmeal on their menu, and we were dropping a few pennies a week on this stuff. Way better than the instant oatmeal i eat fairly regular in the mornings at work. I decided to try to recreate it.

Next, I went home and followed the instructions, boiled some water, put the oatmeal in, total freakin' disaster. Didn't absorb the water, was a glutenous mess. Reminded me of my experiences trying to cook real rice. That's it! Use the rice cooker.

So, I pulled out the rice cooker and looked at the settings. Turns out there is one called 'porridge' on my fuzzy logic zojirushi 5000 so i went about setting it up, turning it on, and putting in the appropriate ingredients (oats and water as described on the oat meal container). After about an hour and a half (including 45 minutes soak time that the rice cooker appropriately counted down for me without any intervention on my part...i love this thing!) the rice cooker beeped at me and out came some absolutely DELICIOUS oatmeal. Great stuff, I mean legendary for those cold winter days.

I also added some organic brown sugar, craisins, and homemade granola from Elephants Delicattesen to give it some crunch and sweetness. I'm not sure the 'organic'-ness adds to the brown sugar, I think its more like 'not the cheap stuff' that makes it better than just average brown sugar.

So, takes longer than the instant stuff, but it tastes great. I'll be adding this to the cooking arsenal.
Posted by adam lake at 11:42 AM 4 comments:

From a portland housing blog comes a very interesting link about an upcoming auction in portland suburban homes. This might come in handy, say, if you were relocating from a town, like say, maybe seattle, and maybe wanted to pick up a good deal on a house, might be worth at least checking out.
Posted by adam lake at 11:01 AM No comments:

I've heard it said more than once "Graphics doesn't matter anymore for games...".

Improved graphics in games is like all the other components of a platform. The end result of a bunch of these various factors: screen size, audio, gameplay, level design, ..., amount of memory, make the game experience.

Gameplay for humans takes place on whatever platforms we have. We had dice made of ivory and marbles made of stone and jacks made of steel and now we have games made of silicon and plastic. Games allow us to engage and teach early and provide a form of play that should probably sit somewhere in maslow's hieararchy around the self-actualization and esteem building component of the pyramid. This gets lost because so often in order to get there we engage in shooting things. Most games aren't about shooting things they are about solving conflicts or figuring out puzzles.

My point, poorly articulated above, is that the argument that there is some platform that suffices as complete for gameplay is backwards. We define as a society what to create playable experiences upon first, then we create forms of play with those devices, not the other way around. In other words, games track technology...it tracks the current social and industrial capital. Therefore, there will be no point at which games will have 'whatever they need forever'. Furthermore, the creation of both games and productivity at each level is what inspires the components of the next level. Our need for play is just as important as our need for production, and it is neither silly nor incorrect that the future of our silicon be driven by one need or the another.

Looking at the Wii and the xbox, basically two larger form factor gaming platforms of this era is really looking at two points in the design space and creating a set of interesting, mostly playable experiences. One doesn't kill or outdate or outmode the other one. The amount of ink spilled on these arguments is silly. its all uninsightful, unthoughtful noise to generate pageviews on the lower rungs of the information hieararchy. Furthermore, boardgames, cardgames, etc will continue to evolve with society, exposing us through play to social norms of the day. They give us a safe place to explore leadership, spirtuality, magic, power, loss, winning, sportsmanship, relating with others, and the whole host of other lessons in life we need to survive and succeed.
Posted by adam lake at 10:57 AM No comments:

Here we are, unloading the goods, call this the 'before', that's Charles in the back of our rental pick-up: 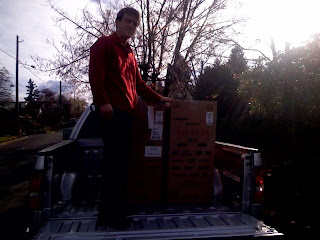 So, last year I put off buying an HD TV for two reasons: spent too much money on furniture already (although, i have to say, we got a great deal and an amazing couch). The second reason was the fact that the 60Hz TVs had motion artifacts around the edges of fast moving objects I found intolerable relative to my CRT.

This year I've researched, studied, analyzed, lost sleep, and came up with my perfect TV (for this year anyway). Its a 120Hz Sony XBR5 w/ motionflow (motion estimation and smoothing). Now, motionflow wasn't impossible at 60Hz, it just didn't seem to be included, its not related to 120Hz.

Gaming is amazing on this TV. I was kinda getting annoyed because content, especially ports from the PC, are absoultely unplayable at 480i (Orange Box, for one example). I wasn't even able to read the text on Dead Rising which was a bummer and made that unplayable.

Now to go hunting for that HD-DVD player!
Posted by adam lake at 10:04 AM No comments:

From Charles comes this link to black friday ads. Thanks dude!
Posted by adam lake at 3:25 PM No comments:

See the video here.
Posted by adam lake at 12:54 PM No comments: