Book Review: Freakonomics: A Rogue Economist Explores the Hidden Side of Everything 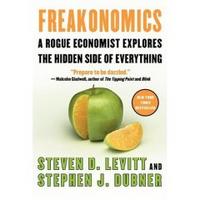 
I read a relatively new book over my trip to Virginia and haven’t had time to jot down my thoughts. it seems this economist has taken the world by storm and found several phenomena that he has drawn a variety of conclusions that seem sensible at first. however, upon thinking about them, I start to wonder. for example, the sumo wrestlers cheating…could it be that the guy who had no chance to win the tournament just naturally reacted to this news and behaved a bit different than he would have? is it all that weird that people that come from uneducated backgrounds and are pumped priorities by capitalist messaging that they demonstrate willingness to subject themselves to financial duress in the hopes of extraordinary financial reward (hello….try grad school, its like the army but you work for the military several degrees removed). it’s the same freakin’ thing and I’m not at all surprised they make minimum wage at the bottom.

I guess in a way, I feel like I’ve been duped. and I’ve read this type of thing before. it’s a persuasive essay, and it’s the same style that C.S. Lewis used in Mere Chrisitanity. he explains things from his side and you’re just so swept away by the writers linguistic acumen that reviewers fail to use actual judgment in rendering a decision.

it was an interesting perspective, and an interesting read, but I find myself wanting of a critical dissection of several sections of his observations. captivitating me doesn’t mean I believe you. but I respect you, and it does mean I will listen to your side of the argument.

yes, good to read, but skeptically.